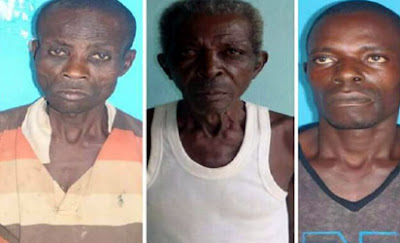 A mother of five, Mrs. Udoaka Sunday, and three others have been arrested by the Cross River State Police Command for sexually abusing her 12-year-old daughter in Calabar.

It was gathered that the woman collects money from various men to sleep with her 12-year-old first daughter.

A neighbour, who spoke anonymously with Vanguard at their Aka Effa residence by Akai Effa Town Hall, confirmed that Udoaka collected money from different men, including a retired 78-year-old soldier, Effiom Okon, and four other persons.

Her words: “That woman is really insane; she is the biological mother of the girl. How can any sane mother allow men to abuse her daughter because she is poor? There is no excuse for the act apart from insanity.

“She has been doing this for long and mostly with elderly men, who are above 50 and mostly those receiving pension, because that is how she ensures that money keeps coming.”

Vanguard gathered that the girl reported the matter to her teacher in school, who, after verifying the information, went to a child rights foundation that blew the whistle and had Udoaka arrested.

A Police source told Vanguard that the woman was a “bad case,” adding that she has five children for five different men.

According to the source, “we thank God for the teacher, who the girl reported her plight to before schools vacated. She was the one who reported the case to a foundation that exposed the trade.

“She is currently nursing a baby, and the father of that child has not even visited since her arrest. That should tell you the kind of person she is; she is a bad person who is insane. No normal human being will allow that old-looking retired soldier to touch her daughter.”

The Cross Rivers State Police Public Relations Officer, Irene Ubgo, who confirmed the incident, said three men and a woman have been arrested and that investigation was ongoing.

Ugbo said: “A woman, Udoaka Sunday, and three men, including 78-year-old, Effiom Okon, are now in our custody and investigation is ongoing to get to the root of the matter.”

Please LOGIN or REGISTER To Gain Full Access To This Article

Wapbaze is an Entertainment website that deals in uploding of music tracks of any kind and letting her users download them in Mp3 formats of high quality. Wapbaze.com is the main website, Wapbaze.com/music/ is the folder for latest songs, wapbaze.com/movies/ is for mp4 movies updates so as wapbaze.com/videos/ is for 3gp music videos updates and wapbaze.com/forum/ is for latest gist, news, health and tech updates.